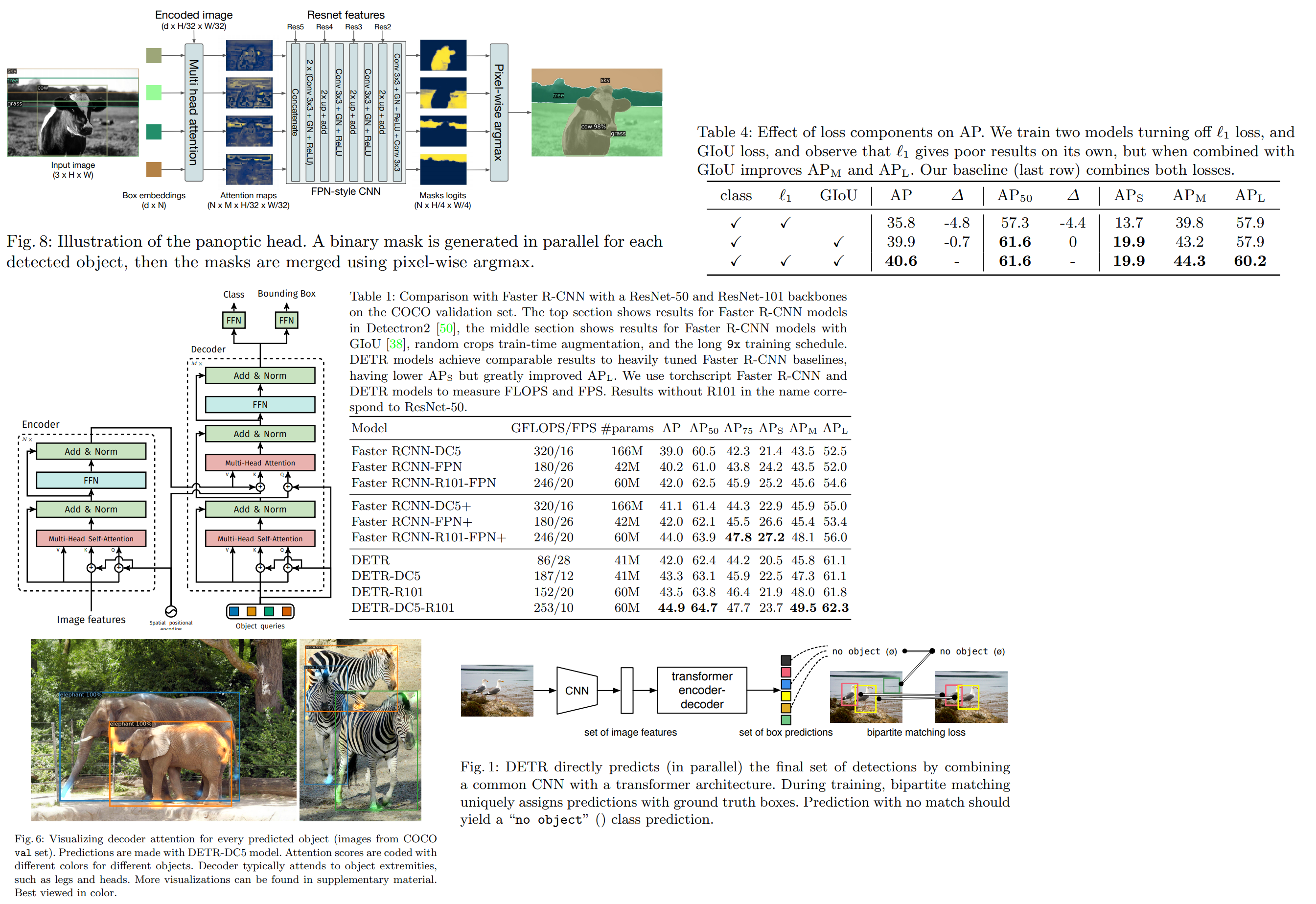 They treat this task as a direct set prediction problem and use a transformer.

Their basic model gets 42 AP on COCO!

DETR predicts all objects at once and trains on a set loss function which performs bipartite matching between predicted and ground-truth objects. There is no need for anchors or non-maximal suppression.

Important no note: DETR is better than Faster R-CNN on large objects but worse on small objects.

The model can be extended to other tasks, like segmentation.

For direct set predictions in detection, we need two things: a set prediction loss that forces unique matching between predicted and ground-truth boxes and an architecture that predicts a set of objects and models their relation in a single pass.

DETR predicts a fixed-size set of N predictions in a single path through the decoder. N is usually set to be very high.

The loss produces an optimal bipartite matching between predicted and ground-truth objects and then optimizes losses for bounding boxes.

To find a bipartite matching between these two sets, we search for a permutation of elements with the lowest cost.

Lmatch - pair-wise matching cost between ground truth and prediction. It is computed efficiently with the Hungarian algorithm.

This matching cost takes into account the class and similarity between bounding boxes.

This is similar to match proposals or anchors to ground truth, but here we look for matching without duplicates.

Now we need to calculate Hungarian loss for all pairs, which were matched in the previous step. For “no object”, class log-probability is divided by 10 to account for class imbalance.

Using l1 loss isn’t a good idea for comparing boxes as the loss will have different scales for small and big boxes. So they use a combination of L1 and IoU.

Lambdas are hyperparameters. Two parts of the loss are normalized by the number of objects in the batch.

Backbone: any backbone can be used. Usually, the resulting feature maps have 2048 channels, and height and width are 32 times less than in the original images.

Encoder and decoder are permutation-invariant.

Encoder. At first 1x1 convolution to decrease the number of channels to d. The encoder needs a sequence as an input, so spatial dimensions are collapsed, and we have feature map dxHW. The ncoder has multi-head attention + FNN and positional embeddings are added in each attention layer.

Decoder. It decodes objects in parallel at each decoder layer. The decoder gets N embeddings - they are learned positional encodings (object queries) and added at each attention layer.

Output embeddings are independently decoded into box coordinates and class labels using FNN Using self- and encoder-decoder attention over these embeddings, the model globally reasons about all objects together using pair-wise relations between them while being able to use the whole image as context.

FNN. The final prediction is made using a 3-layer perceptron with ReLU. The FFN predicts the normalized center coordinates, height, and width of the box, and the linear layer predicts the class label using a softmax function. 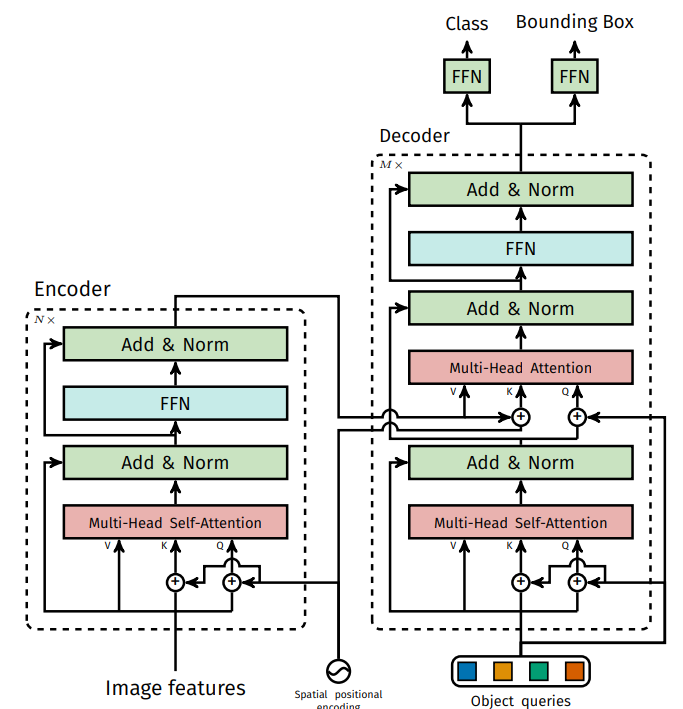 Another approach: increase the feature resolution by adding a dilation to the last stage of the backbone and removing a stride from the first convolution of this stage - DETR-DC5 and DETR-DC5-R101. This improved performance for small objects but lead to a 2x increase in computation cost. 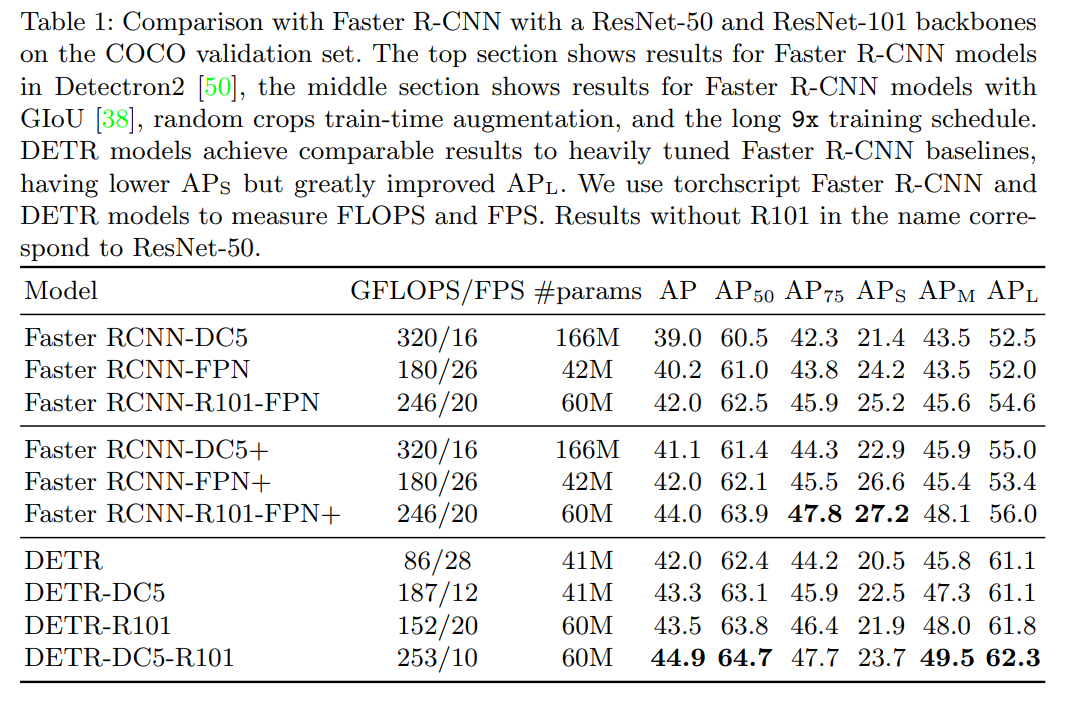 They tried to improve Faster R-CNN:

In this table, Faster R-CNN is trained 3x longer than usual. “+” sign means it was trained 9x longer (109 epochs).

By using global scene reasoning, the encoder is important for disentangling objects. 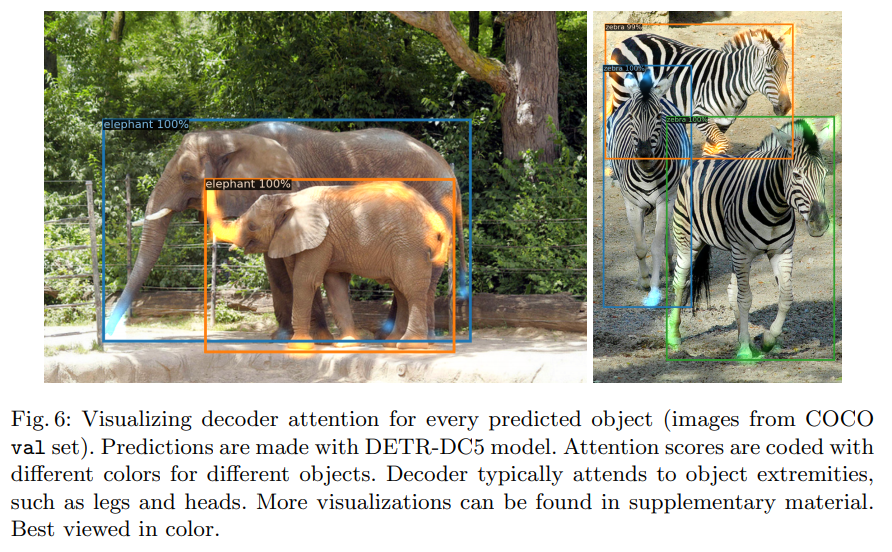 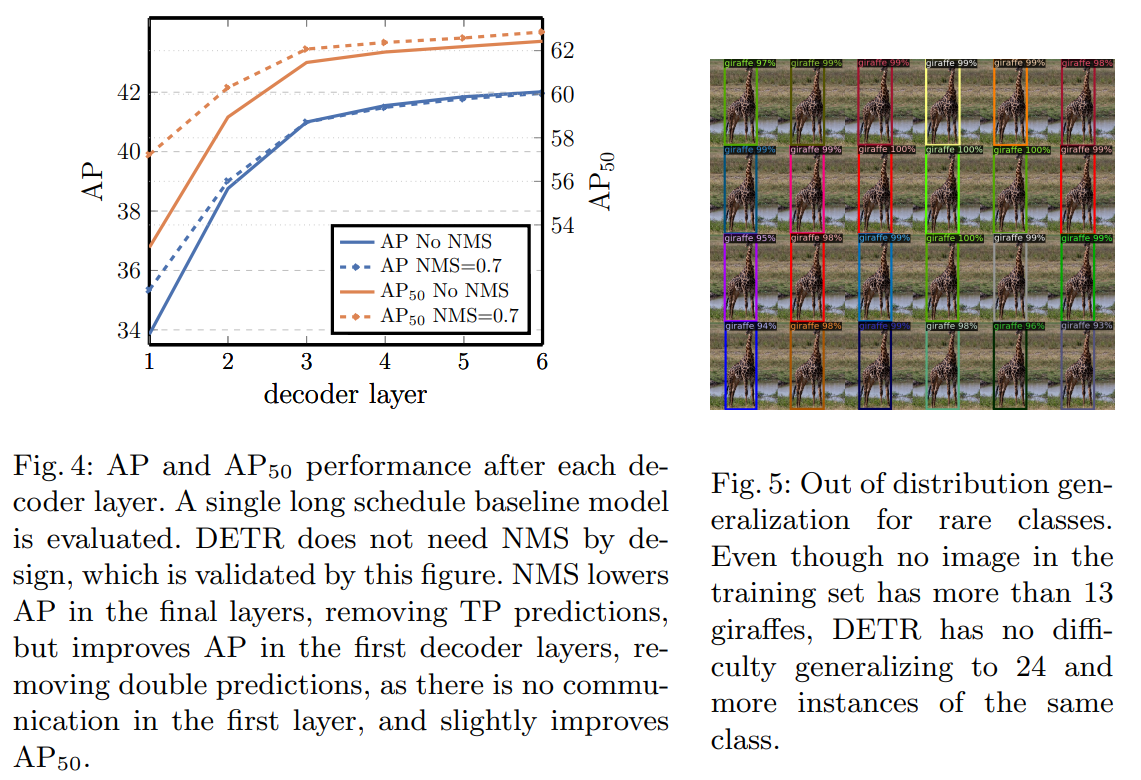 FFN inside transformers can be seen as 1 × 1 convolutional layers, making encoder similar to attention augmented convolutional networks. Without it, we have a decrease of 2.3 AP.

We can simply add mask head after decoder.

At the training, it is still necessary to predict boxes - for hungarian matching.

To predict the final panoptic segmentation, we simply use an argmax over the mask scores at each pixel. This way, there will be no overlaps.

But don’t be too encouraged with the results. For now, the more objects are on the image, the worse is the model: 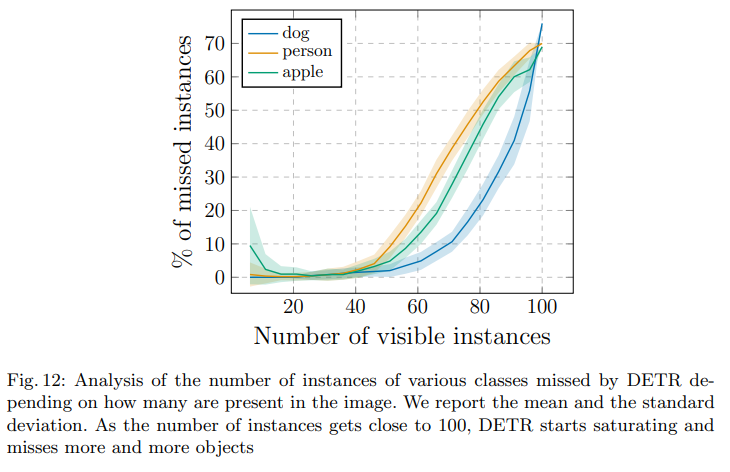