Code and checkpoints are available here (not published at the moment of writing this review). 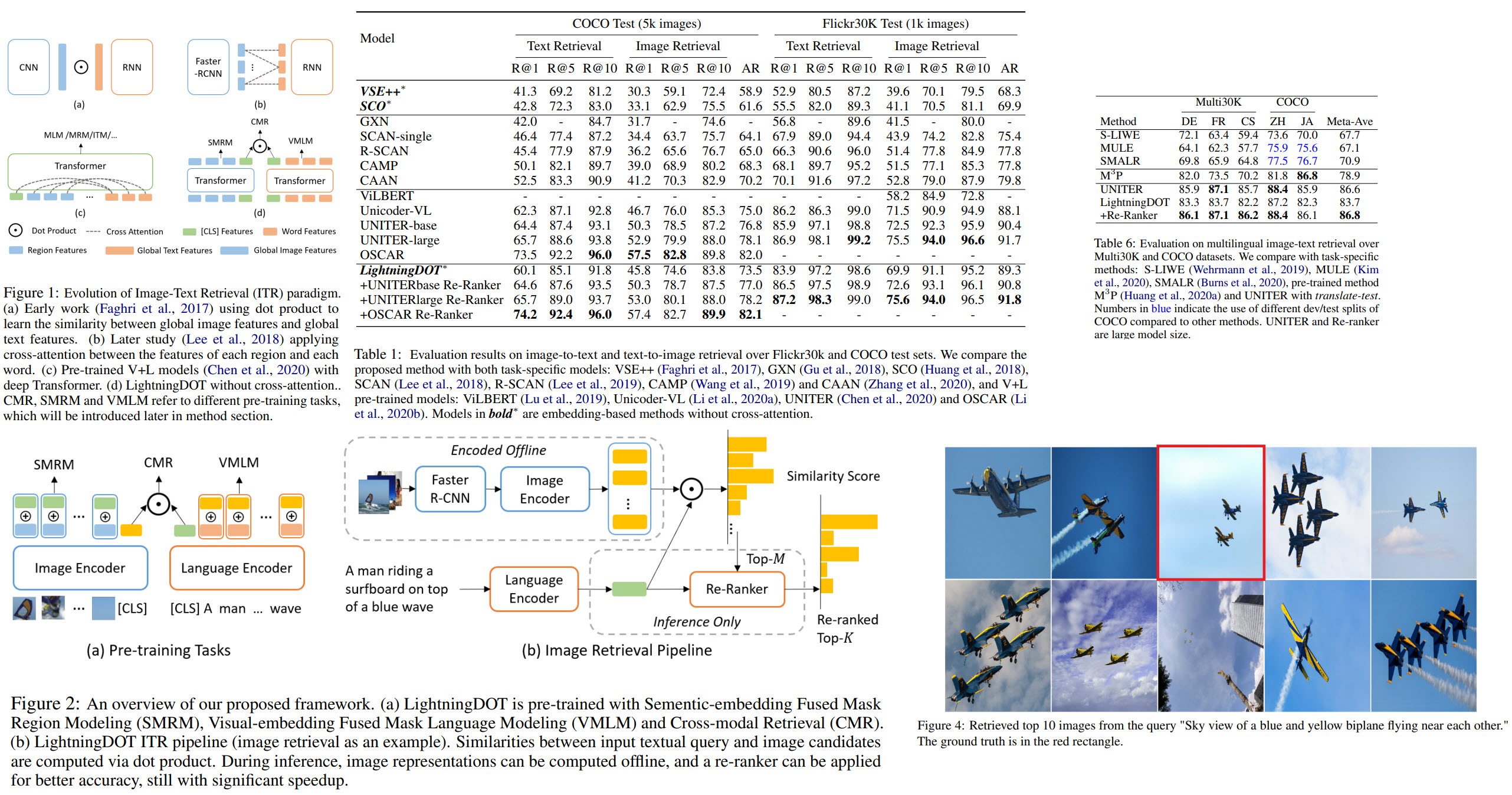 An interesting paper from Microsoft.

Pre-training transformers simultaneously on text and images proved to work quite well for model performance on multiple tasks, but such models usually have a low inference speed due to cross-modal attention. As a result, in practice, these models can hardly be used when low latency is required.

The authors of the paper offer a solution to this problem:

LightningDOT outperforms the previous state-of-the-art while significantly speeding up inference time by 600-2000× on Flickr30K and COCO image-text retrieval benchmarks. 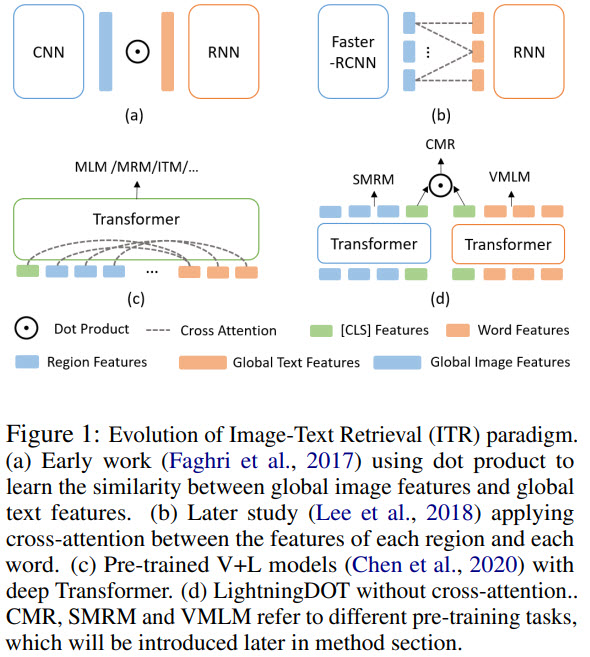 Traditional ITR (Image-Text Retrieval) approaches use ranking over visual-semantic embedding matching or deep cross-modal fusion with an attention mechanism. In the earlier works, images and texts were encoded separately, and the similarity between them was calculated by the dot product.

Nowadays, vision-and-language (V+L) pre-trained models (ViLBERT, UNITER) have better performance. They learn joint text and image embeddings and use cross-modal attention. Even though this attention improves model performance, inference speed suffers due to the size of the models.

For example, the UNITER model takes 48 seconds to make an inference on a text query from the COCO dataset (wow, that’s really slow).

Thus, the authors of the paper have decided that reverting to dot-product should increase the inference speed. To compensate for this simpler method, they use the [CLS] token in both encoders, which transfers the learned embeddings from the other modality.

Also, thanks to this approach, it is possible to precalculate image and text embeddings offline.

Furthermore, after making an inference, we can use any other model for re-ranking.

We have a dataset of paired images and texts. Region features are extracted from images using a pre-trained Faster-RCNN. Texts are tokenized like in BERT (30k BPE vocabulary is used). The first image token is regarded as a global image representation, the first text token - as a global text representation.

MLM - masking 15% of words are masked, and the model tries to predict them. In VMLM, a paired image (or, to be more precise, the global image representation) is used as an additional input to the model.

The idea of MRM is similar to MLM - a part of the image is masked, and the model tries to reconstruct it. Global text representation is added to the learning objective.

This objective uses the paired information between an image and a text: the model is optimized to promote a high similarity score for a matched image-sentence pair. 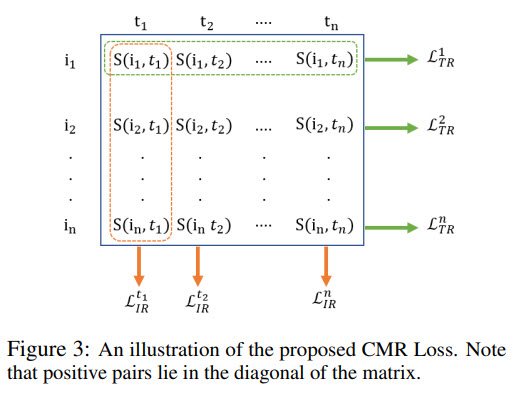 A bi-directional variant of contrastive loss is used here. 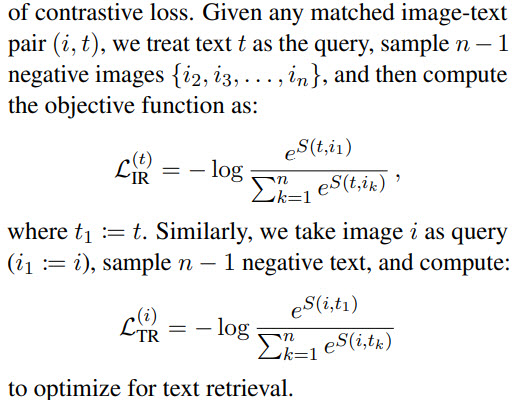 For finetuning only CMR loss is used.

The image encoder extracts features from all images; a global representation is cached into an index.

The text query is encoded using the language encoder, then a similarity score to all image embeddings is calculated. Top K images are selected using FAISS.

Now that we have top K results, we can re-rank them using a stronger retrieval model. This model will be slower, but it re-ranks not all data in the database, but only K results, so it is okay. After the model we have new M top results.

For pre-training they use data as in UNITER: 4.2 mln images with 9.5 mln captures, including COCO, VG, Conceptual Captions, and SBU captions.

For evaluation they use Flickr30k and COCO.

Performance is measured by Recall @ K. Additionally, they use AR metric - an average of all R@K. 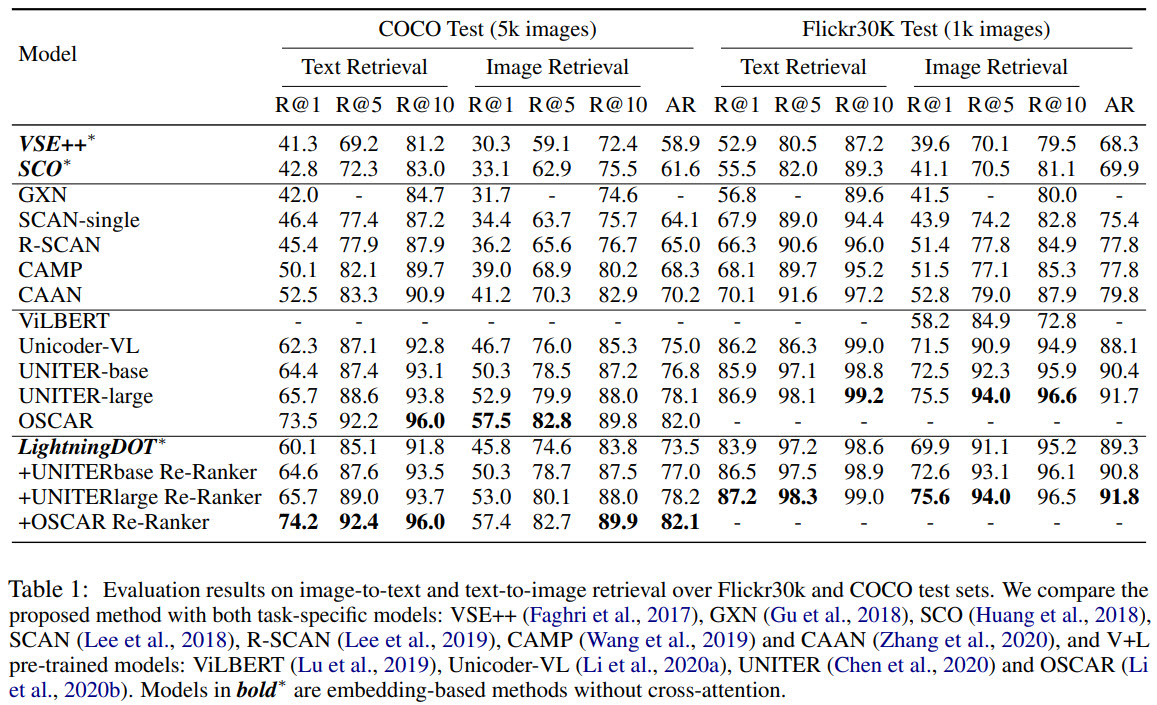 LightningDOT is better than most models - it has lower metrics than models with cross-attention, but the inference speed is much higher. 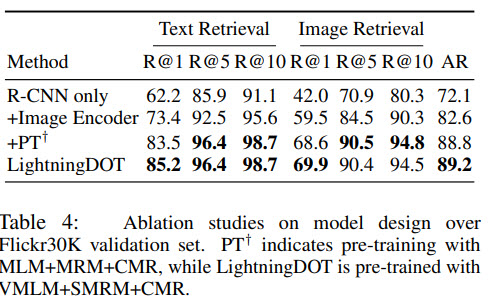 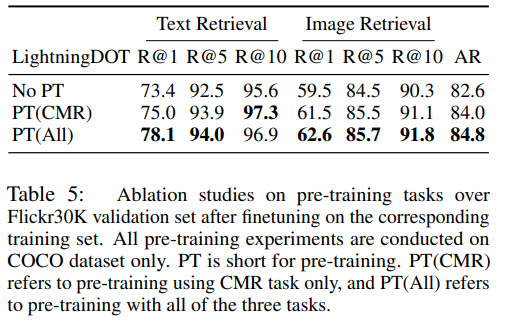 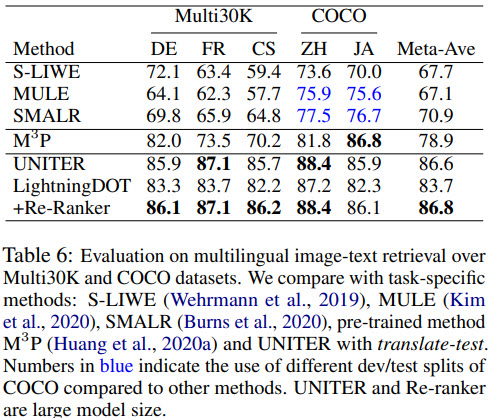 Some examples of the results 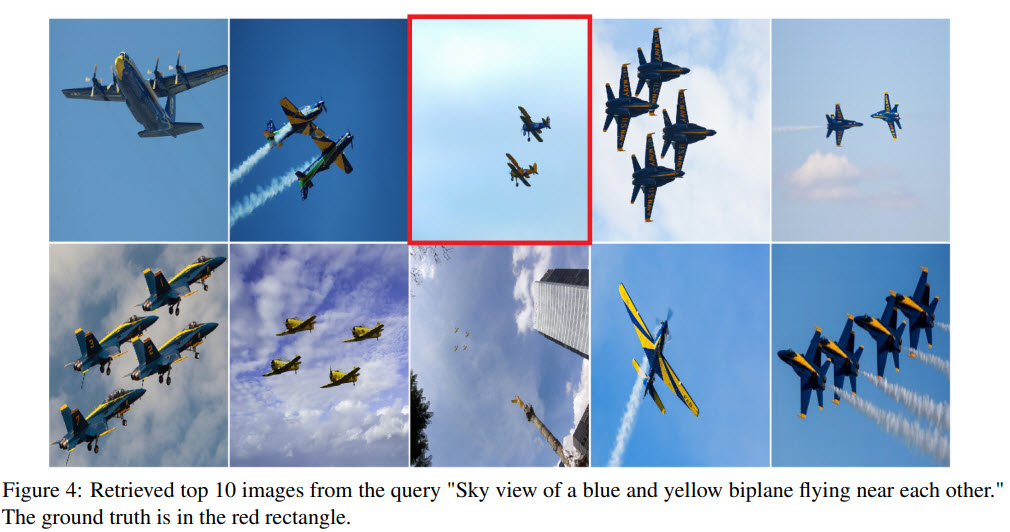 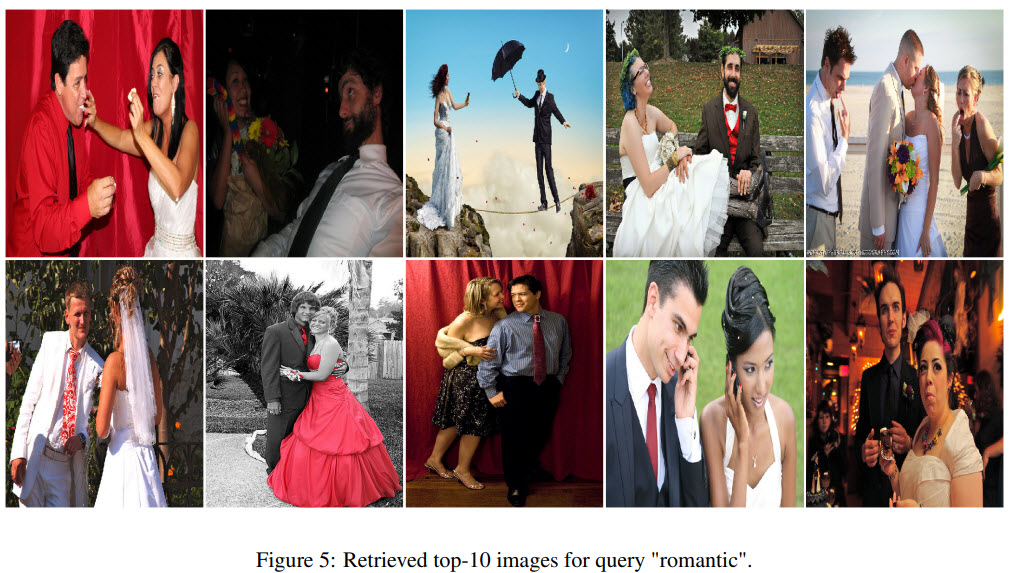 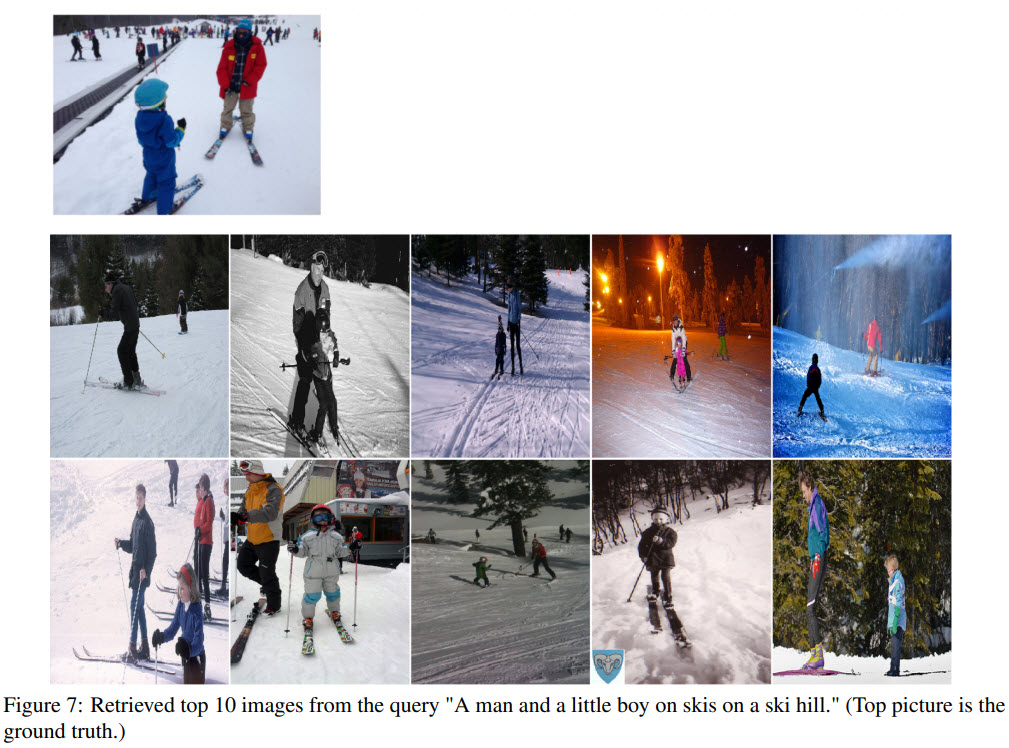 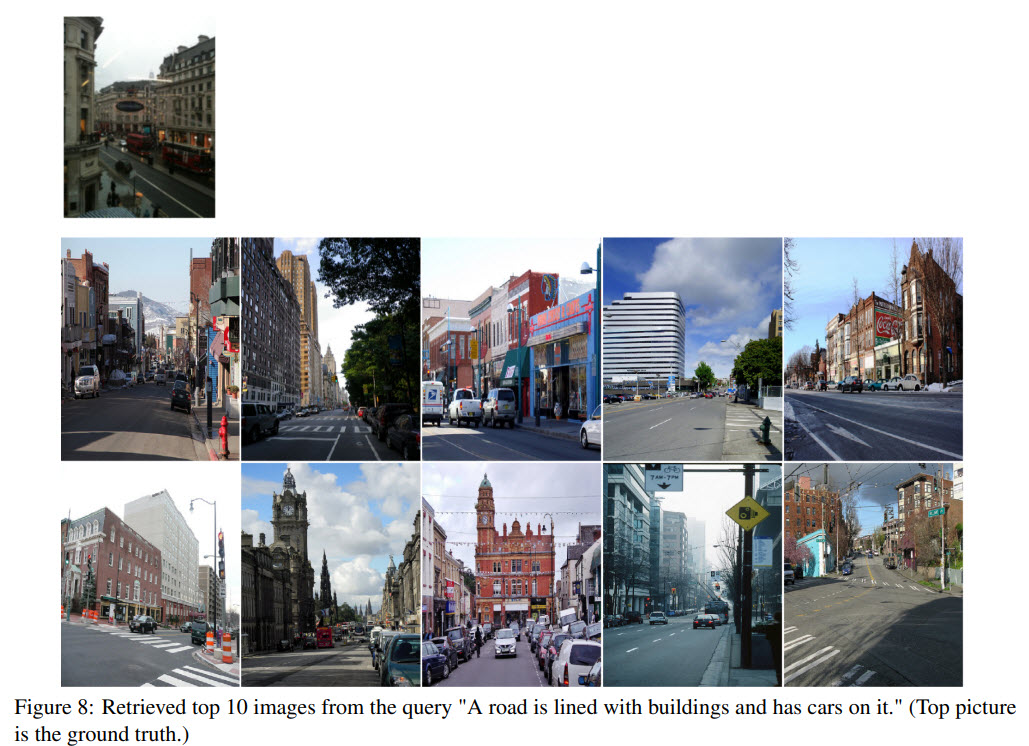 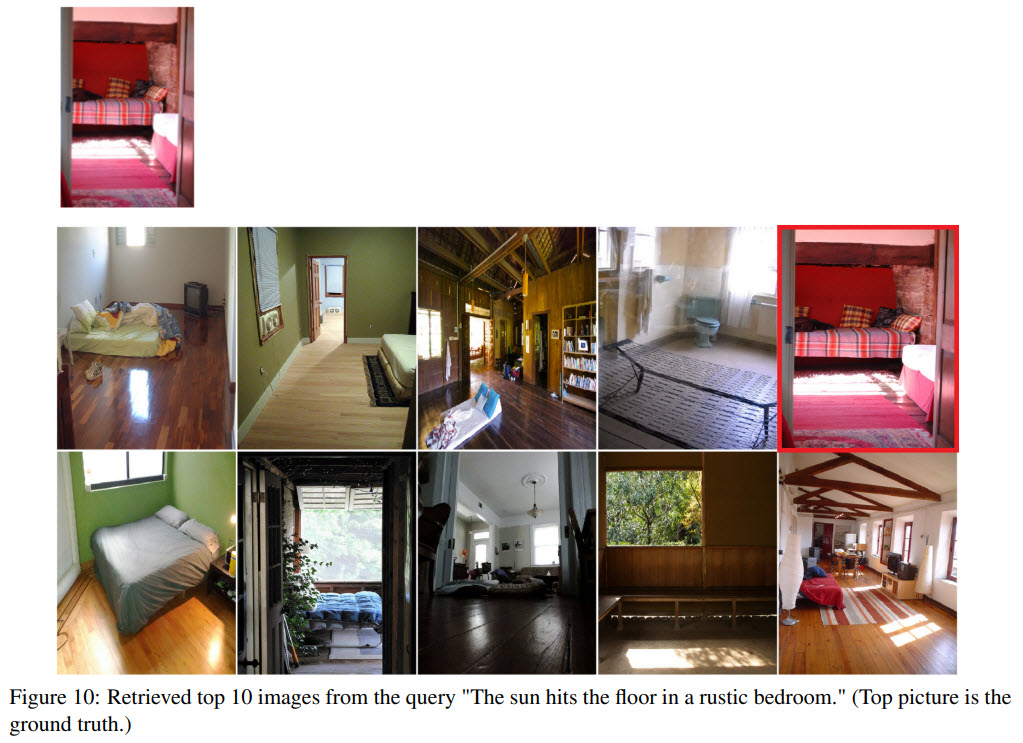 I think this is a fascinating paper, and I’m glad that there is successful research on improving big models’ speed on such tasks.